I raced the Zumbro 17 miler in southern Minnesota this past weekend. I opted for the “sprint” race rather than the 50 or 100 milers that were going on at the same time. Huge congrats to those who did the longer distances! That is a tough loop to do once, let alone 3 or 6 times.

Rather than do a full race report this time, I decided that I will stick to impressions of what I did well with this race, and what I can improve on next time. To be honest, that’s what is more important to me in any case.

I am, on the whole, pretty proud of this race. I ended up in 6th place over all out of 281 finishers. I felt like I pushed hard, but managed to stay in control and leave a little (though not quite enough) in the tank at the end. I got to enjoy an absolutely glorious spring day in a beautiful area of southern Minnesota, and share it with other, like-minded people who, by and large, made a great event even better.

Physical and Mental preparation: I had trained well for this race. Looking back on my training up to this point last year, i got in fewer miles, but more workouts. Last year, I was logging more miles, but fewer of them were focused, quality miles with a definite goal. I was doing weekly 800 meter workouts, but no real trail workouts. I have definitely gotten more elevation in this year, and I think that payed off big time.

The week prior to this, I fell ill to a combination of allergies and sickness. Only a week before the race, I found I couldn’t run at all (let alone my planned 15 miles) because my body had shut down so much. Even a few days before, I was not back to where I had been. That being the case, I tried to set reasonable goals. I looked back at a similar race in Colorado, the Continental Divide Trail Run, and from that figured I could run between 2:15 and 2:30 at Zumbro, depending on the day.

I also planned better for the race course. I studied the elevation profile, locations of the aid stations, and had my plan in place before I set foot in the park. I knew that if I could manage my efforts on the climbs, I could still have enough left in the tank to push on a section of gravel road between 12 and 14 miles. I didn’t go quite as quickly as I’d hoped, managing around 7 minute pace, but that’s much more quickly than I’ve ever run that far into a race before.

Race Day: On the day itself, I did fairly well. I brought my Simple Hydration bottle, allowing me to carry 13 ounces tucked into my waistband. I brought 1 VFuel gel in my shorts pocket, which was useful, but this will also go under “Thinks to Improve.” Despite a somewhat chilly start, I went with shorts, a tank top, and gloves, knowing that it would heat up. Anything more and I would have definitely overheated later.

During the race itself, I played to my strengths well. I let some people go a bit on the uphills, and dropped the hammer a bit on the flats and downhills, trusting my speed work and descending ability. And sure enough, after the first pair of downhills, another racer ran by saying “I don’t know how you take the downhills the way you do.”  On the gravel road, as I said, I didn’t quite have the 6:30s I was hoping for in me, else I would probably have taken 5th. I must have had my pacing nearly perfect, because after the 5th mile or so, I didn’t get passed (nor, sadly, did I pass the 5th place runner).

Preparation: Ideally, I would have gotten another long (15+) mile run in, with a significant flat section where I could drop the hammer. Afton is perfect for that, and would let me work on uphills at the same time. Other than that, I felt pretty good with my preparation, given my illness the week before.

Race day: I knew the aid stations carried Hammer gels, which I don’t tolerate at all. Knowing this, I should have carried an additional VFuel gel for the race. Two gels is just about perfect for this length race (for me).

Secondly, I need to work on my mental game. The last 4 miles or so, I knew where the 5th place runner was. I could see him on the road and wherever the trail straightened out. I did consciously push the pace, running a mental string between us and trying to shorten it slowly and surely. It worked, to an extent, but I ran out of time. I was pushing to the borderline, and if I ran much faster my quad started cramping and twitching. But had I been able to move just 5 seconds per mile faster, I could have made it a sprint for the line.

It was a tough course. My watch said about 2000 feet of climbing, though it was probably closer to 2500 based on other peoples’ readings. There were four big climbs, but those weren’t the worst sections for me. The worst section was coming in to AS3, along a flat section. The only problem was it wasn’t really flat, it had tiny, rolling bumps, like those you see on mountainbike trails. Each little bump sucks just a little life out of your legs.

Seriously, though, it was a beautiful course, and well marked. There was no point where I was worried about getting off course. I would highly recommend the race to anybody who has an interest in mid-length trail race.

Nice, concise, race report! I was one of the 50-milers you blew past. I too loved the course. RSR does a great job organizing these races.

Question. What is your secret to hammering down the descents so well?

Partially, I got a lot of practice in Colorado with long, technical descents. Here, I've started doing repeats uphill and downhill to keep up my downhilling ability.

As far as the secret goes, as much as there is one: Look out a few meters ahead for any big obstacles. Think about where you want to go rather than what you want to avoid. I like to think of it as a dance: it's all about quick feet.

Also, congrats on the 50! No small accomplishment. 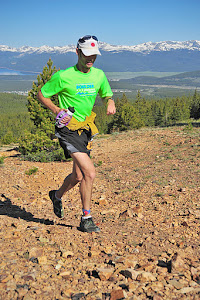